Has anyone noticed that Governor Hassan, in her campaign for U.S. Senate, hasn’t addressed the important issue of Common Core? I suppose if you were running for a seat in the United States Senate, you wouldn’t want to bring up this controversial issue either. Especially since she is the facilitator in New Hampshire and has saddled our public schools with this mess.

As she leaves the corner office in Concord, she leaves a legacy of dumbed down standards for our kids, and continues to ignore parents who want something better.

In this recent article from Utahns Against Common Core, Lt. Governor Spencer Cox addresses the concerns raised by parents in Utah:
“Over the past year, I have listened intently to the growing chorus of concern with regards to the adoption of Common Core standards. While there is clearly a great deal of misinformation being disseminated on both sides of this issue, there are legitimate concerns that I share with those opposed to the Common Core. As I have listened, and researched, it has become clear to me that, although well-intentioned, the conflict, discord and divisiveness associated with these standards is doing more harm than good. Unfortunately, we have lost the focus on what matters most–our students and making sure our teachers have the resources and tools necessary to provide a world-class education. As such, today I announce that I am withdrawing my support for Common Core.”

New Hampshire prides itself on local control in education but Governor Hassan doesn’t want to hear from local parents and residents who are having serious issues with this current education fad.

There is a petition that has 1765 signatures on it calling for eliminating Common Core in New Hampshire. That goes ignored by Governor Hassan. Governor Hassan is AWOL on one of her biggest failures: public education. 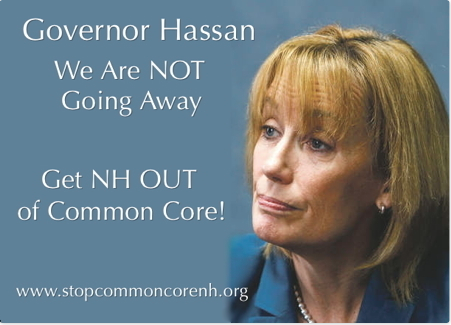