Many of us knew that Hillary Clinton would be BAD on the issue of Common Core , however it’s important to point out that Sen. Bernie Sanders would be bad too.

Those who think Bernie is a good alternative, is in denial about how we got to this problem in the first place.

We are supportive of parental rights but since we have teachers who also support our cause, it’s important to listen to them and be fully supportive of the struggles they now face in their classroom.

The 2015 budget for the U.S. Department of Education will be $68.6 BILLION dollars. That means the Feds take our money, waste much of it paying the bureaucrats who continue to plague us with bad reforms, and then bribe and coerce states in order to get our money back.

Some of that federal money pays for the New Hampshire Dept. of Ed. Roughly 85% of the budget for the NH Dept. of Ed. comes from federal money. That pretty much means that the NH DoE facilitates what the feds want us to do in our schools. No wonder Gov. Hassan and Commissioner Barry are so compliant.

We’ve pointed out Hillary Clinton’s support for Common Core in the past. She’s PART of the problem. Teachers are fleeing her candidacy like it’s a plague and rightfully so.

We’ve wondered though, why they’d run towards Bernie Sanders. Would he be a better candidate for Democrats? Many think so but we’d like to caution everyone before completely signing on to his campaign too.

Whatever the reason, fighting school choice is the wrong battle. Why? Well many teachers are pulling their kids out of public schools and looking for an alternative. They know what’s going on and they want to avoid this disaster like every other good parent out there.

You’d have to go through all of the reforms they put in place but Mass. developed some of the best academic standards for their public schools. Mass. changed the teacher accreditation process so teachers certified would have to be well educated in academic content. That means that if the schools of ed were wasting time on teaching social justice, this would put a potential teacher in jeopardy of not earning a license to teach. In other words, Mass. expected teachers to know the academic content they were expected to teach the students. Schools of Ed that focus on preparing teachers academically UPLIFTED teachers which in turn would benefit their students.

Fast forward to the Common Core reform and we see parents and teachers racing to withdraw their kids from public schools.

We do not see this so much in New Hampshire since we do not have private charter schools, however we are seeing it in states like IL and NY where local school boards have been eliminated, public schools shut down and children sent to charters. (New Hampshire has public charter schools)

We are seeing backlash from teachers who are fighting the privatization and school choice movement. They see what’s going on.

As this battle rages on we call upon our allies fighting Common Core to make this distinction when fighting against school choice. Many parents need alternatives right now as their children suffer under the Common Core reform.

The focus should be on decentralizing education and taking the power away from the Federal Government and putting it back into the hands of the local community. That includes parents, teachers, administrators and taxpayers.

Federalism allows us to see what’s working in one state and work to make those improvements in our own state. We have the Mass. example but our Governor is ignoring it. Instead Governor Hassan signed us up to follow an unproven experiment that has only brought problems to our classrooms.

The best thing we can do is to work together to remove power from the Federal Government that we never delegated to them. (See the 10th Amendment to the U.S. Constitution) This can be done by abolishing the U.S. Dept of Education. Anything good they provide could easily be moved to another department.

Now back to Bernie Sanders. Is a Bi- Government-Socialist an answer to these problems? Of course not. It’s people like him who have grown the federal government bigger and bigger each year. Handing them power that was never delegated to them by the states.

How would a big government socialist like Bernie Sanders help this situation? All you have to do is look at his vote to re-authorize No Child Left Behind. (S.1177)

That’s right, a big government socialist just voted to further empower the federal government and continue the feds interference in our classrooms.

The threat is not “choice” in education if the Feds are not involved in education. Local communities and states that are committed to uplifting public schools will attract the students and parents to local public schools. A lesson in federalism has already proven it.

Isn’t it time to start looking at what works? Right now the feds, with the help from Democrats and big government Republicans add to this problem. We suggest looking for and supporting presidential candidates who understand this and will work to remove power from the Feds and return it to the local communities. The first step would be, ABOLISH the U.S. Dept. of Education. 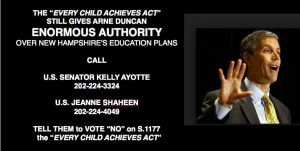