Did your State Representative vote against LOCAL CONTROL for your School District? SB 101 would have Prohibited the State from Requiring School Districts to Adopt Common Core.

GOVERNOR MAGGIE HASSAN AND THESE 138 STATE REPS STOOD UP AGAINST PARENTS, LOCAL CONTROL AND SB 101: 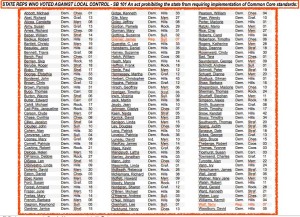 This is what Governor Hassan is doing to your children.

http://www.wsbtv.com/news/news/local/state-superintendent-common-core-math-not-mandated/nmLDH/#__federated=1
PLEASE CLICK ON THE LINK AND WATCH THE SHORT VIDEO!!
Some state officials are finally admitting how bad Common Core is for your children.

This year is proving to be quite the battle for parents who want control over their local schools versus allowing the Feds to run their schools with the help from the New Hampshire Dept. of Education.

We’ve highlighted pro-parent legislation like HB206 and how Rep. Terry Wolf (R-Bedford) removed written consent from parents, in an amendment, when their children are subjected to invasive surveys on controversial issues like sexual activity, gun ownership, drugs, alcohol, etc.

We’ve highlighted how SB101 was vetoed by Governor Hassan that simply clarified that schools do not have to adopt the Common Core standards. Chairman Raffio of the New Hampshire Board of Education also ignored the voices of parents and objected to SB 101. By placing SB101 in to statute, it would have helped parents who want to direct their local schools to use superior academic standards. Here is a list of State Reps who voted against parents (voted nay)

Democrats and a few Republicans have actively worked against parents and we hope we’ve managed to point out who those legislators are.

We’d like to keep pointing out a trend among the Democrats and a few Republicans who consistently oppose parental rights in New Hampshire. We’d also like to point out that you may actually be paying the salaries of lobbyists who also actively lobby against parental rights legislation too.

Let us remind you that just a few short years ago when Governor Lynch VETOED HB542 which gave parents the right to replace objectionable material (at their expense) that was assigned to their child.

Since then a few parents have exercised their right to replace materials that were assigned to their children that they found objectionable.

The law has worked great to help parents but it has also helped the schools too. How? Often times parents have to fight to remove objectionable material from the class and/or school. Now if one parent objects, they can simply replace the material for their children and not disrupt the class if the rest of the parents are fine with the assignment.

It’s important to take note of the same faces/lobbyists who continue to actively work against parents in New Hampshire.

See the attached letter below from the BIA urging Governor Hassan to VETO SB101.
SB101 prohibited the implementation of Common Core in New Hampshire Schools.

The BIA has been engaged in supporting Common Core in New Hampshire for a few years. They have been actively working against parents and teachers in New Hampshire who want better quality standards.

So what does the BIA gain from a dumbed down public school system? Well according to this payment, the Gates Foundation paid $1,910,978.00 to the National Chamber of Commerce for their support of Common Core.

The Chamber has been pushing Common Core ever since.

Your children are up for sale in New Hampshire and it’s not a good thing. Ask Governor Hassan why the Business Industry Assoc. is MORE important than parents, teachers and students in NH.

NH parents. Today Governor Hassan vetoed SB101 which would have prohibited the State Dept. of Ed and Board of Ed from forcing schools to use the Common Core Standards.

Please share this video with parents across New Hampshire and let them know, this is the kind of curriculum the Governor supports in our local schools.

This video is going viral and it SHOULD. It’s bad enough that parents are frustrated by the Common Core aligned curriculum that is destroying any chance at their child’s future in a math field. But now we have a New Hampshire State Representative bothered by parents who contact him and exercise their voice in this democratic process.

SB101 passed the New Hampshire Senate and was recently brought before the New Hampshire House Education Committee. Parents from around the Granite State mobilized by e-mailing the Committee members and testifying in support at the hearing.

There was overwhelming support by parents in favor of SB101 which would prohibit the state from requiring implementation of common core standards. Why? Because parents are fed up with these new academic standards in math and English.

This petition already has almost 1500 signatures calling for the end to Common Core in NH.

Where are all of those parents who want Common Core? No where to be found.

Parents are trying to work for better standards in their local schools only to be told they have no choice but to use them because they are mandated by the state. Parents are then told by the NH DoE that Common Core Standards are “voluntary.”

SB101 clarifies; “This bill prohibits the department of education and the state board of education from implementing the common core standards in any school or school district in this state.”

Schools are still free to use Common Core, however schools can adopt better quality standards instead.

This is available right now which is why Wakefield’s School Board rejected the problematic Common Core standards in favor of the higher and better OLD Massachusetts standards.

By placing this language into statute, there is no confusion and adds clarity to this mess we have in NH.

Today the House Education Committee debated and discussed SB101. During this discussion, Representative Mel Myler from Merrimack District 12 made some shocking comments regarding the parents who contacted him asking for his support.

We’ve got news for the elitists who think they know better than parents, we do know what we are talking about and we still don’t like Common Core.

Rep. Myler’s comments have gone viral now and only add to the problem we are seeing from this top-down approach to education reform. Those who continue to force this on schools marginalize parents who now have to deal with this mess at their kitchen table.

The good news is, SB101 did PASS the House Education Committee. The majority HEARD what the parents said and voted YEA. See the photo below to see how the committee members voted. 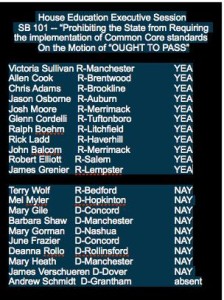 IMPORTANT BILLS TOMORROW. PLEASE attend the hearings if you can.
Come to the Legislative Office Building BEHIND the State House:

AN ACT relative to non-academic surveys or questionnaires given to students.
SUPPORT with AVARD amendment that will require WRITTEN consent from parents on surveys.

9:40 am in room 103 before the Senate Education Committee.
Come into the room and sign the sheet. Sign in SUPPORTING HB206 WITH AMENDMENT.
IF you can get up and speak, please also mark that you are wanting to speak.
Get there about 9:30 to make sure you sign the sheet.

IF you cannot attend this hearing, please send an e-mail (with your address) to the Senators in support of HB206 with the Avard Amendment that requires written parental consent on all surveys

AN ACT prohibiting the state from requiring implementation of common core standards.
SUPPORT
11:15 am in room 207 before the House Education Committee
Come into the room and sign the sheet in SUPPORT.
If you can speak to the Committee, PLEASE do.
You will need to fill out a PINK CARD and turn it in to one of the Members of the Committee.

If you cannot attend this hearing, send an e-mail to the NH State Reps supporting SB101
HReps@leg.state.nh.us

NEW HAMPSHIRE: You are encouraged to attend this important hearing on Common Core.
IF you cannot make the hearing, please write to the Senate Education Committee and ask them to SUPPORT this important legislation:

RSA 193-E:2-a, IV (b) The common core state standards developed jointly by the National Governors Association Center for Best Practices and the Council of Chief State School Officers shall not be required by the department of education or the state board of education to be implemented in any school or school district in this state.