Girard at Large on Gorski [Audio]

You can run but you can’t hide. Apparently Duncan thought better of his inappropriate remarks and edited his blog post, removing the comments referring to anti-Common Core activists as “bottom feeders”. But we have the page and this screen shot, preserved for eternity. 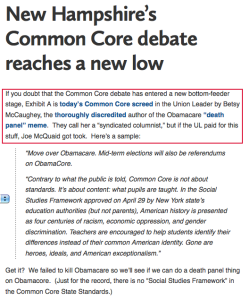 Bill Duncan’s latest denial isn’t cutting it. Unlike the Johnny-come-lately Duncan, most of NH’s educational activists and researchers who oppose Common Core have been in the loop on educational issues for more than 30 years.

Duncan is Governor Hassan’s latest appointee to the state school board; another “rich old white man” (and it isn’t we who are teaching the kids and teachers about this white privilege nonsense, but apparently it’s only SOME “rich old white men” who are at fault and we have to hear about why everything is their fault…) who hasn’t got a clue about the purpose of education.

This time, while having few facts to back his claims, he has just about called Common Core opponents “bottom feeders”.

The subject of his latest name-calling is Betsy McCaughey over her article which appeared at the Union Leader, but was first published at the Coalition of NH Taxpayers Website on June 11, 2014. McCaughey will be the keynote speaker at CNHT’s July 5th event.

Duncan begins by claiming that McGaughey (sic) is “the thoroughly discredited author of the Obamacare “death panel” meme.”

Now if only Duncan could SPELL McCaughey correctly we might take him seriously. But since the “death panel” meme has already proven true by admission of the health czars of the Obama administration, (See Peter Orszag Admits Death Panels Existed From the Beginning) even good spelling won’t have us changing our minds. Public opinion has it that this extremist Duncan shouldn’t be allowed to make ANY decisions about the education of NH’s children.

As far as claiming there is no “Social Studies Framework”, we wonder why teachers were invited to a social studies training session to bring them up to speed on Common Core’s requirements? Included in the week’s training were such propaganda lessons about the legality of the Federal Reserve, and foreign policy matters, delivered by — you guessed it — representatives from groups such as the Council on Foreign Relations and the Federal Reserve Bank itself. Who knew?

From an actual attendee:

“I left the social studies conference with the understanding that now our children are being taught about social justice, equality, tolerance, becoming community activists for social change as well as what is and isn’t fair according to someone other than me (the parent). In addition, our children are learning about being a global citizen, not an American citizen. Many of the sessions I attended were plugging the United Nations and the Rights of the Child treaty. I heard over and over again the need for the U.S. to ratify this treaty.”

So much for his claim that the UN is not behind MOST of what we do in American education today or that this is not part of their attempt to centralize and control everything and everyone on the planet (aka Agenda 21). Everything in the following snippet of the flyer (click for larger view) that was handed out at the recent forum in Hollis was true. 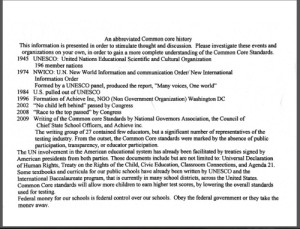 Duncan claims that “opponents of Common Core have lost five big votes in the Legislature”. Perhaps it’s because our NH legislators have forgotten why we have a US Constitution and that the federal government, let alone corporations and NGOs, by law, has no legal right to fund, create, or mandate curriculum for our local schools.

If the debate is reaching a new low, it is due to the cognitive dissonance of those like Duncan who won’t admit that our educational system has been corrupted and co-opted for political purposes.

Related News: Hollis-Brookline is a Lesson in Contradictions