This is an informative article on the link between Common Core in America’s classrooms and Democratic presidential candidate, Hillary Clinton.

That’s right – the 2016 Democratic Presidential candidate who has been endorsed by the leaders of the national teachers unions has a corporate education reformer running her campaign.

Read and watch the video by clicking on this link: https://gadflyonthewallblog.wordpress.com/2016/03/08/hillary-clintons-campaign-manager-is-a-longtime-corporate-education-reformer/

Did some of the Republican presidential candidates just make a colossal error? Possibly, although this could actually be a calculated move.

A summit on education was announced this week with a few of the Republican presidential candidates participating. The summit will be moderated by Campbell Brown and include discussions on America’s education system. Unfortunately they skipped right over the grassroots activists IN NEW HAMPSHIRE who’ve been working on this issue for the past five years.

There is now a huge network of activists, parents and teachers across New Hampshire who are actively engaged in issues like Common Core, school choice, charter schools, etc. It would be easy for a national organization to collaborate with local leaders and activists. Unfortunately none of our local activists were contacted.

Some of the more prominent conservative and liberty organizations working on issues in education are well known throughout New Hampshire. Organizations like New Hampshire Families for Education, School Choice for New Hampshire, and Cornerstone Action have active leaders and were not contacted nor invited to help organize this event.

These organizations have worked with national organizations in the past in order to bring New Hampshire voters information on issues in education. Their goal has been to make sure the discussion is focused on engaging parents who have been negatively impacted by the federal reforms in education.

Can you imagine if these candidates were to come and discuss the importance of supporting the 2nd amendment and ignore all of the New Hampshire pro-second amendment organizations? One would have to wonder, why the snub?

Could it be that the moderator of this event, Campbell Brown, is an avid supporter of Common Core?

Campbell Brown is featured in this article by one of the nationally known activists, Mercedes Schneider. Schneider explains how Brown wants to explain to all of us what Common Core is all about. As if those of us who’ve actually had to deal with it in our schools remain uninformed. But isn’t that how our own Commissioner of Education and Chairman of the Board of Education have treated parents in the past?

We don’t know how great Common Core really is even though we are the ones directly impacted by the confusing math, flawed testing and data collection.

Don’t you just love how the elites who want to tell us how great Common Core is while their precious angels never have to deal with it in their private elite schools? Schneider provides a long list of elitists who force Common Core on our schools but wouldn’t touch it for their own kids. Campbell Brown is included in that list along with President Obama.

It looks like the BIGGEST Common Core supporters running for president will be at this summit, Governors Jeb Bush and John Kasich. Governors Bobby Jindal, Chris Christie and Scott Walker have Common Core baggage that cause many of us to question their capacity to make good decisions in education if they were to become president. Carly Fiorina would be wise to skip this summit,contact local grassroots organizations and start talking to the parents who want to be heard instead of TOLD that the garbage they are seeing is really good for their children.

Senator Rand Paul came to New Hampshire several months ago and met with the parents and teachers fighting Common Core in New Hampshire. Senator Rick Santorum has an education summit scheduled tomorrow in Manchester to do the same thing. Candidates like Senators Cruz and Rubio have said they’d be willing to work with New Hampshire activists and parents to engage in the same kind of discussion. In other words, they want to meet directly with the people who’ve been impacted by the federal reforms coming from D.C. into their child’s classroom.

Did the campaigns involved in this upcoming summit make a mistake by leaving out the grassroots organizations? We wondered about that, however it seems that if you want to control the message and make sure the tough questions are kept out of the discussion, what better way than to keep those closest to the problem away from the discussion.

We are not surprised that Hillary is going to be in trouble with teachers throughout America. In fact, we expect to see more posts like the one above.

In this blog post you can see the contempt for Hillary is just starting to build, “Not a surprise – Big Money supports Common Core, so of course Hillary Clinton does too.”

It’s important to also note that in that post they go on to say, “If Jeb Bush becomes the GOP nominee and Clinton is the Democratic nominee, both major party candidates will be Common Core supporters.”

This just emphasizes the importance of Republicans to choose a candidate that’s a little different from Hillary.

Governor Jeb Bush came to New Hampshire a few weeks ago and told us why we should support the re-authorization of No Child Left Behind NCLB. Many teachers and parents were shocked to learn the Governor not only supports the Common Core Standards in our schools, but now he’s trying to get us to support re-authorizing No Child Left Behind.

At what point do we say, he’s out of touch? Did he even read HR5 for instance? All 600 pages PLUS? And if so did he read about the many problems in the Bill that will continue to plague our local schools?

How can Jeb Bush ever be trusted as President if he is that out of touch with the parents in New Hampshire who’ve had to endure the failures of No Child Left Behind and the current problems with Common Core?

To make matters worse, now the NEA is teaming up with Governor Bush to push for reauthorizing NCLB too.

Yes you read that right. The nations teachers union, instead of calling for repealing the law, they too want to re-authorize it in their way. 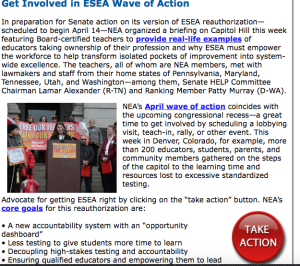 No where do they call for the repeal of NCLB. They simply want to re-work it and pass it.

We’d like to see Governor Bush and the NEA to start putting parents back in control of their local schools. NCLB and the current proposed legislation continue to leave parents out.

Teachers and parents are fed up with the over-reach by the federal government into our schools. We do not need an out-of-touch Governor and the union leadership joining together in an effort to re-authorize legislation that continues to cut parents out of the picture.

Here is what Jeb Bush and the others do NOT get:

By Bill Evers:  EXCERPT The Common Core undermines citizens’ exit option and competitive federalism. It was designed to do so. It likewise evades and negates the voice option. But the makers of this malign utopia have forgotten a few things.

They forgot that the desire for a voice, the desire for political action, can become particularly intense when people are faced with the prospect of nowhere to exit to. They forgot that hemming in parents and teachers would create a demand for alternatives and escape routes. Alternatives to the national common-core-aligned tests have arisen. States are dropping these national tests. States are also struggling to escape the common-core cartel itself. Parents are opting out of common-core testing.

By trying to block exit and voice, the designers and proponents of the Common Core State Standards have caused blowback: A large parent-, teacher-, and community-based movement has arisen to oppose the common core and its national tests.
http://educationnext.org/exit-voice-loyalty-common-core/

Paul did not name Jeb Bush personally, but the former Florida governor and potential 2016 candidate has been an outspoken advocate for Common Core national educational standards. Bush was here in North Carolina on the other side of the state in late September to endorse the state House Speaker Thom Tillis’ U.S. Senate bid against incumbent Democrat Sen. Kay Hagan (D-NC), during which Tillis sought to distance himself from Bush’s views on both immigration and Common Core.

During the event where he endorsed Tillis, Bush pushed Common Core and immigration—two things from which Tillis distanced himself from Bush.

The good thing about NH grassroots Republicans, they are WELL AWARE of the damage inflicted on their children through the Common Core Standards, Curriculum and Assessments.
They stand UNITED against Common Core and candidates who support them.

It’s no surprise that as Gov. Bush visits other states, he will begin to feel the push-back from legislators and voters…….

GREENSBORO, N.C. — In one of his first public appearances of the 2014 campaign, former Gov. Jeb Bush of Florida had a vivid preview Wednesday of the challenges he would face with his party’s conservative base should he seek the Republican nomination for president in 2016.

Standing alongside Thom Tillis, the North Carolina House speaker and Republican Senate candidate, Mr. Bush outlined his views on two of the issues he cares most passionately about: immigration policy and education standards. But as Mr. Bush made the case for an immigration overhaul and the Common Core standards, Mr. Tillis gently put distance between himself and his guest of honor, who had flown here from Florida on a dreary day to offer his endorsement in a race that could decide which party controls the Senate…

On the Common Core, the educational standards first devised by a bipartisan group of governors, which have become deeply unpopular among conservative activists, Mr. Tillis also sounded far more conservative than Mr. Bush. The North Carolina House approved the standards in 2011, but, facing primary challengers from the right earlier this year, Mr. Tillis backed away from them.

“I’m not willing to settle just for a national standard if we think we can find things to set a new standard and a best practice,” Mr. Tillis said, pivoting to an attack on the federal Education Department as “a bureaucracy of 5,000 people in Washington” who make an average salary of a little more than $100,000…

Gov. Jeb Bush who is one of the BIGGEST supporters of Common Core, announced he is going to run for President.

We are fortunate to live in NH and can be a real voice in choosing a good candidate for President. JEB BUSH IS NOT THAT PERSON.

IF he cannot get education RIGHT, then he is NOT fit to run this country.

Please let your friends, neighbors, & family know that Jeb Bush is NOT an option if they are Republican.