We almost fell off our chairs when we heard Gov. Chris Christie say that Common Core has been eliminated in New Jersey. Does he think parents are complete idiots? It sure seems like it.

We have many examples of states and schools re-branding their “state and local” standards but upon closer examination, the standards pretty much mirror the Common Core standards. This is done as a way to fool parents into thinking the governors or superintendents listened to them.

This is what was done in Indiana under Governor Pence and in Manchester, NH under Superintendent Livingston. They tell parents who are angry and want superior standards that they’ve heard them but the final product shows that parents were patronized and ignored.

Now we have Governor Christie, during a national debate, trying to tell us that they eliminated Common Core in New Jersey? He’s again, playing parents like they are fools.

New Hampshire bureaucrats tell us that schools can use whatever standards they want but then the NH Dept. of Education forces them to use the Common Core Smarter Balanced Assessment. That’s like saying, you can choose any color car on the lot but when you walk out there, you notice they are all red.

What they say is meant to mislead you. But Governor Christie underestimated New Hampshire voters because we look past the political lies and jargon. No Governor Christie, under your tenure children have been subjected to inferior academic standards because you’ve failed to lead your state to quality education reform.

New Hampshire parents are looking for real leadership, not a follower of Obama education reforms.

Our suggestion? Go back to New Jersey and fix the mess you created. Stop trying to fool New Hampshire parents into thinking you’ve done anything to free up the public schools to use quality standards and tests.

If we can’t trust the candidate now, how can we trust them when they are elected?

For more information we encourage you to look at this:
Gov. Chris Christie’s curious plan to dump the Common Core — but keep the Core test

Chris Christie: ‘We Got Rid of Common Core in New Jersey’

We try to reach out to parents and educators in states where a presidential candidate is serving as governor.

This time we heard from Sue Ann Penna from New Jersey who contacted us with information on Governor Chris Christie.

Governor Christie fully implemented the Obama/federal education reforms. Since then parents and educators have been fighting the federal reform in their local schools.

Here is a recent post by Sue Ann Penna from New Jersey:

After 5 years of defending Common Core, on May 28, 2015 Christie announced the end of the existing Common Core standards in New Jersey and has suddenly decided they are not working. Prior to this announcement, he stated, “This is one of those areas where I’ve agreed more with the president than not” and called any Republican opposition to Common Core a “knee-jerk reaction … that if the president likes something, the Republicans in Congress don’t.”

But have they really ended?

The outcome of the May 28th announcement is that he directed the NJ Dept of Education to convene teams of NJ educators and parents to conduct a review of NJ’s previous standards to consider recommending changes that make NJ standards higher and NJ based.

A report was supposed to be available the end of 2015, but according the DEP website, it will not be available until January 2016. http://njstandardsreview.statestandards.org/

The reality is that although the Governor said he was ending Common Core, I can assure it has not ended.

How can he claim to end common core with no replacement in place and ready to be implemented?

Here is a link to a welcome letter from a principal to parents at Oak View Elementary School in Bloomfield, NJ. It states very clearly that
“At Oak View, our curriculum is aligned very closely with the Common Core Content Standards, teaching Language Arts, Math, Science, Social Studies, and Health.”
http://oakview.bloomfield.schooldesk.net/Portals/Bloomfield/Oakview/docs/Welcome%20to%20Oak%20View%20School.pdf

The other curious point about this big announcement is that Christie also stated that NJ would continue PARCC testing, even though the tests are common core aligned.

If PARCC testing is not ended, how does Common Core end in NJ?

The May 28, 2015 press conference was a lot of words with no substance. You can read the entire text or watch the video and clearly see Common Core is alive and well in NJ and Christie has not ended it.

Again, Common Core would have been ended if he said, “we are ending common core and returning to a classical education model.” But claiming to end it and only offering up a commission to study a replacement does NOT constitute ending Common Core. Setting up a commission is just a way to toss the can down the street and make it seem like you are doing something, when in fact, you are doing NOTHING.
https://www.washingtonpost.com/news/answer-sheet/wp/2015/06/10/gov-chris-christies-curious-plan-to-dump-the-common-core-but-keep-the-core-test/ 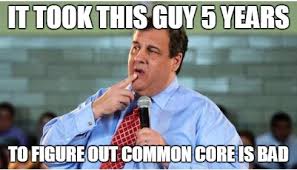