Now that the abysmal Smarter Balanced scores have come out, the spinning has just begun.

The Common Core soldiers in the state are spinning these results to avoid some of the tough questions that come from this testing scheme.

In the past, New Hampshire under Commissioner Virginia Barry, students took the NECAP. Now they are taking the Smarter Balanced Assessment.

What does this mean for children who took the NECAP and those who recently took the SBA?
Does this mean, as one activist in New Hampshire recently said, the NH Department of Education has been lying to parents in the past?

While they SPIN these results, it’s important to note how none of these bureaucrats take responsibility for any of this. 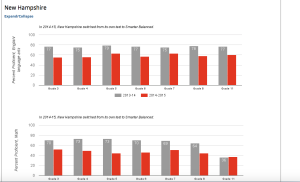 Q: What kind of change in results can states expect with higher standards and these new assessments?
A: As students have more years of instruction aligned to new standards, results typically improve. For example, in Kentucky, the first state to begin using the Common Core standards, student test scores went down at first. But, over the next four years as teachers and students worked to meet higher standards, the percentage of high school graduates meeting the state’s benchmark for college and career readiness increased from 34 percent to 62 percent. There also have been impressive gains in ACT sores in Tennessee since adoption of more rigorous standards. And in California, where students have taken an early assessment of college readiness and participated in 12th grade courses to improve their preparation since 2007, the proportion of students needing remediation at the California State University has dropped from 56 percent to 43 percent.

Here is what Commissioner Barry left OUT of the propaganda ………
FROM THE Bluegrass Institute:
http://www.bipps.org/kentucky-educations-shaky-statistics/#more-14497

Do Kentucky’s schools deserve to be, “…congratulated for their continued progress on graduating more students with the skills and knowledge they will need to succeed in the 21st century,” as Interim Kentucky Commissioner of Education Kevin Brown claims?
Sadly, Holliday and others are actually hitting on sour notes, using “apples to oranges” comparisons in what they consistently mislabel as the state’s “College and Career Readiness” rates. Aside from presenting numbers that are not comparable over the time period cited, a growing number of people think Kentucky Education’s latest numbers themselves are a shaky.
Furthermore, when the college/career ready numbers are tied to those graduation rate figures, it turns out that a gruesomely large proportion of our students are leaving high school with only a hollow piece of paper. Thousands being declared ready are not really getting the educations they need.
How many kids are we talking about? Even if we accept both Kentucky Education’s college/career rates and graduation rate data as accurate, the Bluegrass Institute estimates that more than 40 percent of the students who started the ninth grade with the high school class of 2015 failed to leave school with an adequate preparation for life. Some of those who failed dropped out of high school, but many were socially promoted all the way to an empty diploma.

BOWLING GREEN DAILY NEWS
http://www.bgdailynews.com/news/groups-question-school-standards/article_2524e644-e523-5fd8-a9e6-04131fe36dd9.html
Findings from two groups suggest the Kentucky Department of Education’s standards for preparing students for college and adult life are lacking and that the department’s statistics are misleading.

KDE’s willingness to put “spin above substance” makes its data misleading, said Jim Waters, president of the Bluegrass Institute. The institute “works with Kentuckians, grassroots organizations and business owners to advance freedom and prosperity by promoting free-market capitalism, smaller government and the defense of personal liberties,” according to its website.

“We have questions about whether we’re really getting the needed information to really determine how Kentucky has performed in its college and career readiness arena,” Waters said. “Have these improvements actually occurred, or has the bar been lowered to give the appearance of improvements?”

NH residents need to start asking themselves, when did they give up local control to the Commissioner of Education, Virginia Barry?
Has our State Commissioner of Education overstepped her boundaries AGAIN?
Who pays the Superintendents?
Who hires and fires the Superintendents?
It’s not the Commissioner, and she has NO right to put our administrators in a position where they cannot share information with the people who pay their salary.
The NH Dept. of Education is again, overstepping their authority and grabbing control away from local communities.

From the Girard at Large web site:

The Manchester School District, in response to a right to know request we filed last Thursday, has acknowledged it has received the city’s Smarter Balanced Assessment scores from the state Department of Education and has had them for several weeks. However, in an email sent to us yesterday, Superintendent Debra Livingston denied our request for the scores to be released, saying they would be released in conjunction with the state D o E. (Interestingly, she copied the entire school board on her response, despite our not copying them on our inquiry.)

Results withheld
Just four hours later, the district issued a statement saying the scores will be available to parents and the public on November twelfth. The statement also announced that S A U staff will quote

“soon be reviewing the data and preparing instructional materials for principals and teachers to use in order to interpret and make the best use of the data.”

It also said the data will be sent to the schools later this week and given to teachers on Monday, September twenty eighth. Livingston said the data would be used to quote “establish a baseline of achievement.”

Glassner: Got the info
We made the inquiry after State Board of Education Chair Tom Raffio told Sid Glassner, during his show Inside Education on this radio station, that the state had the assessment scoring and had sent it to school districts weeks ago. Glassner discussed it at length last Thursday during the Girard at Large “Is Our Children Learning?” segment. According to the state department of education, the scores were supposed to be released in July so districts could use the data to inform instruction in the coming school year.

Finally Commissioner Barry has decided to meet with the Manchester School Board next Monday night, reversing her previous opposition to PUBLIC meetings. NH BoE Chairman (and lobbyist) Tom Raffio will join the Commissioner, since she didn’t want to meet alone with Mayor Gatsas.

Let’s make the Commissioner accountable to the people. Let’s have an open discussion on her new Waiver proposals.

We encourage parents to read the full article below.  The New York Dept. of Ed is now engaged in encouraging school administrators to manipulate and lie to students.

While this is a different scenario that should send shock waves to parents across the country, we’d like to remind everyone that our own NH Commissioner has regular PRIVATE meetings with NH Superintendents.   These private meetings are not open to the public so we cannot request notes or records.

While we are not suggesting the same kind of manipulation is taking place, it has concerned us for a long time that the Superintendent who is supposed to work for the local taxpayers, is now engaged in private and closed door meetings with the NH Commissioner of Education.

It is examples like the one below that makes us even more concerned about this lack of transparency on the part of the NH Dept. of Ed.

We call upon Governor Hassan to stop these closed door meetings with her Commissioner of Education and bring transparency back to the NH Dept. of Education.

New York State Field Tests: ‘Students Should Not Be Informed’ Of Connection To Standardized Exams

A memo has recently surfaced in which the New York State Department of Education appears to encourage educators to mislead students about upcoming standardized field tests meant to “provide the data necessary to ensure the validity and reliability of the New York State Testing program.”

“Students should not be informed of the connection between these field tests and State assessments,” the memo reads. “The field tests should be described as brief tests of achievement in the subject.” (Read the document below.)

The memo is signed by Candace Shyer, interim executive of the state’s Education Department, and was sent to The Huffington Post by Leonie Haimson, executive director of Class Size Matters, a nonprofit organization that advocates for smaller class sizes.