We’ve been warning about the data-mining of our children’s information through the SLDS (Statewide Longitudinal Data System)
Parents need to look at some of their elected officials to see who originally supported this in New Hampshire.

What’s the problem with data-mining information on your children? You can read about that here:
http://truthinamericaneducation.com/privacy-issues-state-longitudinal-data-systems/cogs-in-the-machine-big-data-common-core-and-national-testing/

Read about parents having difficulty getting information on what the school/state is collecting on their children here: http://truthinamericaneducation.com/privacy-issues-state-longitudinal-data-systems/in-colorado-parents-are-denied-access-to-their-students-data/

OUR SUGGESTION? Immediately start sending WRITTEN requests to your Superintendent and the New Hampshire Department of Education and ask to see all information that has been collected on your child. Ask them in writing where information on your child is sent. It’s important to do this in writing so everything is documented.

If you run into problems accessing this information, contact Senators Ayotte and Shaheen directly to see if they will intervene on your behalf. Ask them why they would sign off on a data-collection system that gathers information on your child without your knowledge or consent. 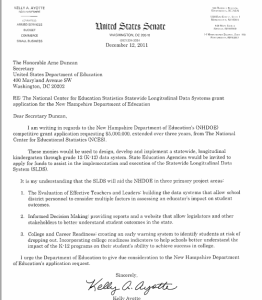 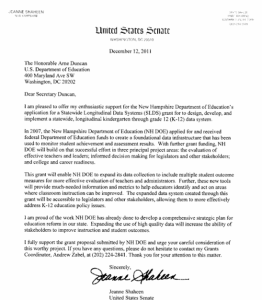 SEE Article below that explains why the re-write of No Child Left Behind CEMENTS Common Core into LAW:
Contact the New Hampshire Congressional members and Senators using the phone numbers below, and tell them you do not support the Every Child College and Career Ready draft legislation; students and teachers deserve real reform, not a rebrand!

The U.S. Senate is fast-tracking new legislation titled the Every Child Ready for College or a Career Act of 2015, which will reauthorize No Child Left Behind (NCLB). The author of the bill, Senator Lamar Alexander, claims it’s an effort to restore the power of local and state education agencies, but, in reality, it does the opposite. In fact, his bill places more conditions on the way states develop their standards, assessments, and accountability systems than required under NCLB, and will cement the Common Core State Standards into federal law.

Support for the reauthorization of NCLB is at an all time high, as states have argued that the federal NCLB waivers and Race to the Top grants  issued by the Obama Administration are too prescriptive and go beyond the authority granted to the U. S. Secretary of Education under the program. The problem with Senator Alexander’s bill is that it doesn’t undo these requirements, it simply includes them into the new law making what was once only a requirement for states seeking a waiver into a  federal mandate.

For example, NCLB legislation (2002), required states to adopt standards that: ‘‘(I) specify what children are expected to know and be able to do; (II) contain coherent and rigorous content; and (III) encourage the teaching of advanced skills.” This allowed states broad discretion to establish standards that best fit the needs of students in their state.

In 2010, the US Secretary of Education limited this discretion when it issued NCLB waivers and Race to the Top grants.  To qualify for these programs, states were required to adopt standards that were “college and career ready” which, in theory, sounds reasonable. In practice, however, the specific criteria used by the US Department of Education to determine if standards were “college and career ready” was anything but reasonable and denied states their constitutional right to independently determine their own standards.

The US Department of Education has defined “college and career ready” as standards which:

“align to the entrance requirements, without the need for academic remediation, for an institution of higher education in the State.”

If Senator Alexander intended his bill to do something different, why did he  include the same language? The Every Child Ready for College or a Career Act mandates that states adopt standards which:

“aligned to the entrance requirements, without the need for academic remediation, for an institution of higher education in the State.”

The inclusion of this definition in the reauthorization bill no longer requires the U.S. Department of Education to issue waivers to coerce states into adopting CCSS, the Every Student College and Career Ready Act conveniently puts it into law. Senator Alexander’s reauthorization bill  is nothing more than the NCLB waiver requirements rebranded as the Every Student College and Career Ready Act. If his bill passes, there will be no escaping Common Core if states want to participate in federal education programs which offer $15 billion in funding to states.

It’s almost laughable when members of Congress talk about the tough legislation they want to pass to “ban” Common Core and “prohibit” the U.S. Department of Education from coercing states to adopt specific standards; this language is meaningless. They won’t have to force states to adopt Common Core,  alignment to them will be a requirement for participation in the lucrative federal education program. It’s the same play on words used to disguise Obamacare as medicaid expansion waivers: States aren’t “required” to enforce Obamacare’s medicaid expansion mandates to receive the program’s federal funding, they just have to align their state medicaid program to the same guidelines.

Government officials assume the American people are too stupid to catch on to the bait and switch surrounding the reauthorization of NCLB, and their arrogance prevents them from noticing that they aren’t fooling anyone! If Congress wants to expand NCLB and place states under the Common Core regime, then say it and live with the electoral consequences. If they truly desire to cut the federal over-reach into education policy that is strangling the achievement of American students, then they should allow NCLB to sunset, and block grant federal funding to states for education- without restrictions and federally inspired paramenters with failed track records.