We are wondering why two Republicans on the House Education Committee, Rep. Rick Ladd and Terry Wolf, are joining Democrat Rep. Mary Gile, to bring one of the chief architects of Common Core to New Hampshire WITHOUT any critics to counter his propaganda?

If the two Republican Representatives have joined forces with Hillary Clinton and Bernie Sanders on this important issue, maybe it’s time for them to share that information with the rest of us!

We HIGHLY ENCOURAGE ALL PARENTS, TEACHERS, and ANYONE else concerned about the erosion of local control and the problems with “Common Core,” to ATTEND THIS MEETING.

The House Education Committee invites colleagues in the House and Senate to a day of continuing education entitled “Education Through an International Lens,” to be held Tuesday, November 10th at 9:00 a.m. in LOB rooms 210-211. Speakers will include Dr. Julie Bell, Education Program Director for the National Conference of State Legislators (NCSL), and Mr. Marc Tucker, President and CEO of the National Center for Education and the Economy. Dr. Bell will offer a brief introduction to NCSL and their rationale for a major study on international education. Mr. Tucker will provide an overview of how other industrialized countries compare to the U.S. on various indicators of student achievement, including educational standards, assessments and accountability, time and learning, funding and equity and teaching policy. A panel representing N.H. educators and businesses will follow.
HOSTED BY Reps. Rick Ladd, Mary Stuart Gile, and Terry Wolf

WE ALSO ENCOURAGE YOU TO READ the following articles about Marc Tucker to familiarize his positions on education reform. For instance, his support for ELIMINATING local control in education. Something New Hampshire prides itself on. (Dr. Sandra Stocky replies to Marc Tucker’s last visit to NH: Liar Liar Pants on Fire)

PARENTS need to write the three legislators and ask them WHY they would not invite Dr. Stotsky to this presentation given her close proximity to New Hampshire. Dr. Stotsky who is a resident of Massachusetts has visited New Hampshire many times to offer an expert analysis on the problems with the Common Core standards. Or Dr. Duke Pesta who has also traveled to New Hampshire on many occasions to bring parents critical information on Common Core.

Why would they not want to offer the audience critical information on this education reform? What are they hiding and why are they attempting to keep our elected representatives IN THE DARK on this issue? 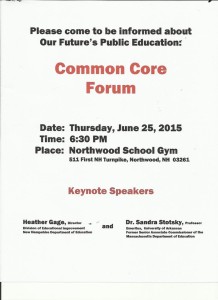