It would be nice to let Governor Hassan know how Common Core is failing our children. Unfortunately she does not have town-halls which means that unless you pay to attend a fundraiser for her, it might be difficult for the public to weigh in on this education reform.

The New Hampshire Department of Education is having a listening tour. This will give parents an opportunity to speak directly to the facilitators of these federal programs in our schools.

Take the time to attend one of these meetings if they have a meeting near you. Make sure you take a list of problems you are seeing in your local school. 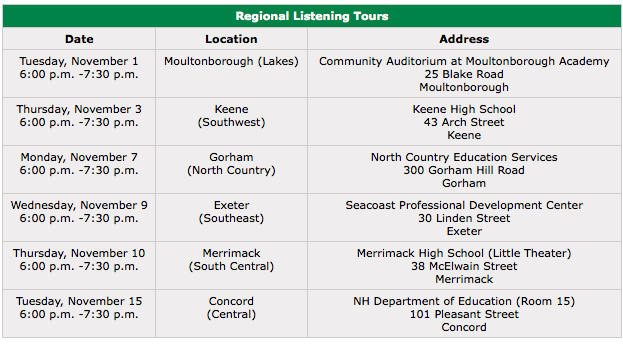 Q: What kind of change in results can states expect with higher standards and these new assessments?
A: As students have more years of instruction aligned to new standards, results typically improve. For example, in Kentucky, the first state to begin using the Common Core standards, student test scores went down at first. But, over the next four years as teachers and students worked to meet higher standards, the percentage of high school graduates meeting the state’s benchmark for college and career readiness increased from 34 percent to 62 percent. There also have been impressive gains in ACT sores in Tennessee since adoption of more rigorous standards. And in California, where students have taken an early assessment of college readiness and participated in 12th grade courses to improve their preparation since 2007, the proportion of students needing remediation at the California State University has dropped from 56 percent to 43 percent.

Here is what Commissioner Barry left OUT of the propaganda ………
FROM THE Bluegrass Institute:
http://www.bipps.org/kentucky-educations-shaky-statistics/#more-14497

Do Kentucky’s schools deserve to be, “…congratulated for their continued progress on graduating more students with the skills and knowledge they will need to succeed in the 21st century,” as Interim Kentucky Commissioner of Education Kevin Brown claims?
Sadly, Holliday and others are actually hitting on sour notes, using “apples to oranges” comparisons in what they consistently mislabel as the state’s “College and Career Readiness” rates. Aside from presenting numbers that are not comparable over the time period cited, a growing number of people think Kentucky Education’s latest numbers themselves are a shaky.
Furthermore, when the college/career ready numbers are tied to those graduation rate figures, it turns out that a gruesomely large proportion of our students are leaving high school with only a hollow piece of paper. Thousands being declared ready are not really getting the educations they need.
How many kids are we talking about? Even if we accept both Kentucky Education’s college/career rates and graduation rate data as accurate, the Bluegrass Institute estimates that more than 40 percent of the students who started the ninth grade with the high school class of 2015 failed to leave school with an adequate preparation for life. Some of those who failed dropped out of high school, but many were socially promoted all the way to an empty diploma.

BOWLING GREEN DAILY NEWS
http://www.bgdailynews.com/news/groups-question-school-standards/article_2524e644-e523-5fd8-a9e6-04131fe36dd9.html
Findings from two groups suggest the Kentucky Department of Education’s standards for preparing students for college and adult life are lacking and that the department’s statistics are misleading.

KDE’s willingness to put “spin above substance” makes its data misleading, said Jim Waters, president of the Bluegrass Institute. The institute “works with Kentuckians, grassroots organizations and business owners to advance freedom and prosperity by promoting free-market capitalism, smaller government and the defense of personal liberties,” according to its website.

“We have questions about whether we’re really getting the needed information to really determine how Kentucky has performed in its college and career readiness arena,” Waters said. “Have these improvements actually occurred, or has the bar been lowered to give the appearance of improvements?”

A CALL TO ACTION: URGENT
Send the following message to ALL of our State Reps. and Senators ASAP:

Are they playing POLITICS with test scores? Are the proficiency levels SO bad, that they have to wait until AFTER local school board elections?

Ask the legislators to call upon Commissioner Barry to RELEASE the Smarter Balanced Assessment SCORES IMMEDIATELY.
Stop playing politics with our children and our schools.

Exploiting Children for Federal Grant Money is not the NH Way of Education!

On the broadcast; How upset would you all be if you were being accused of violating a law you didn’t violate, and then losing your job? A conversation with Lisa Brady, a woman who’s in a battle with Education officials over this very question.

If the above video does not appear on your device, use this direct link:
https://www.youtube.com/watch?v=LZZV9nMlgGQ

To NH Parents, Taxpayers & School board members:
SB81 and SB82 restore local control and reign in the over-reach we are seeing from the Commissioner and the NH Board of Education members.  (note: all are POLITICAL APPOINTMENTS and are NOT elected)

It’s important for school board members to CONTACT the NH SBA and make sure they are at the hearings next week to offer testimony supporting both bills.  Remember WE pay the salaries of the NH School Boards Administration through our taxes that go into the School Budget and is paid through dues.  (Check your school budget for a line item of Dues paid to the New Hampshire School Boards Association)

SB81 essentially allows the NH BOE to make rules AFTER the people have spoken through their legislators. ie…instead of the BOE taking what the NH DOE hands them from the US DOE and implements RULES, instead they will have to listen to the PEOPLE.
That’s a simple one if you go and look at Ed.306 (over 90 pages of RULES) that came from the NH Board of Ed last year. Within that 90 pages plus you can clearly see the Obama Ed agenda now put into rules schools must follow.

It’s important that EVERYONE again, supports this legislation and request the NHSBA to also support it.

SB82 is similar. It reigns in the APPOINTED Commissioner of Ed. She is NOT ELECTED and her power is limited in Statute. She does NOT speak for the people and should not be acting as if she guides the Superintendents. WE hire them through our ELECTED local board members and WE PAY THEIR SALARIES.

Private meetings with Superintendents where NO notes are taken and nothing is public violates the public trust and is an over-reach.

It’s important that EVERYONE contact the Senate Ed Members and request that the NHSBA do the same.

Hopefully, the Department will stop bullying the other school districts as well.
The Department never held a single Public Hearing on the proposed Smarter Balanced Assessments. It’s not surprising that many school board members, principals and teachers are opposed to them, including some in Nashua.
Read more from NH Families for Education here

From the Manchester Union Leader

MANCHESTER – City officials have prevailed upon the state Department of Education to release millions of dollars in federal funds that they say the agency withheld over the school district’s efforts to opt out of the Smarter Balanced assessment test.

Manchester Superintendent Debra Livingston said DOE Commissioner Virginia Barry told her, without elaborating, that the funds would be made available.

“I just got a call that the money is being released,” she said Wednesday. “That was the extent of the conversation.”

Livingston wrote a letter to Barry earlier this month expressing concern that the district had only received $460,000 out of $4.2 million in anticipated federal reimbursements so far this school year.

“The district has received information that the New Hampshire Department of Education (NHDOE) may not be remitting or processing the District’s grant funds/applications over concerns about the District’s anticipated noncompliance with the administration of the Smarter Balanced Assessment,” Livingston wrote. “The District is very concerned that failure to timely remit or process such grant funds/applications could have serious financial consequences for the District and more importantly its students.”

The letter was copied to the governor, top legislative leaders and the state’s entire Congressional delegation.

Livingston wrote the letter at the urging of Mayor Ted Gatsas and with the full support of the school board.

Gatsas has steadfastly maintained that the state DOE assured him the district would be able to implement its own assessment test as part of a broader effort to develop its own curriculum as an alternative to the Common Core State Standards.

The Smarter Balanced test, set to be administered statewide in the spring as the successor to the NECAP test, is aligned with Common Core.

Common Core has been assailed by conservative activists as an attempt by the federal government to impose unsound and ideological standards on local school districts. A growing number of parents and teachers across the country also have criticized the standards and their implementation.

Gatsas said he would insist on getting “in writing” the commitment from the state DOE to release the federal funds to the district.

The decision may weaken one lever of control wielded by the state DOE in the standoff over Smarter Balanced: the roughly $21 million in federal funds the district receives annually to support a wide array of programs aimed at assisting low-income students and struggling schools.

Manchester, the state’s largest school district, is now poised to be one of only a few to not participate in the Smarter Balanced assessment in the spring.

The move is likely to further exacerbate the rift with state education officials, who have long lamented the district’s comparatively poor performance on statewide assessments and higher than average dropout rates.

In place of Smarter Balanced, district officials are considering using an assessment test developed by the Northwest Evaluation Association (NWEA), a Portland, Ore.-based company that has provided consulting services to the district in the past.

At the same time, Livingston said should the district go with a NWEA assessment, some adjustments to the newly implemented Manchester Academic Standards would likely be in order. Test scores could suffer as a result, she said, at least the first time the assessment is administered.

In any case, she said, “Any kind of testing right now is to establish a baseline to see where we’re at.”