Did some of the Republican presidential candidates just make a colossal error? Possibly, although this could actually be a calculated move.

A summit on education was announced this week with a few of the Republican presidential candidates participating. The summit will be moderated by Campbell Brown and include discussions on America’s education system. Unfortunately they skipped right over the grassroots activists IN NEW HAMPSHIRE who’ve been working on this issue for the past five years.

There is now a huge network of activists, parents and teachers across New Hampshire who are actively engaged in issues like Common Core, school choice, charter schools, etc. It would be easy for a national organization to collaborate with local leaders and activists. Unfortunately none of our local activists were contacted.

Some of the more prominent conservative and liberty organizations working on issues in education are well known throughout New Hampshire. Organizations like New Hampshire Families for Education, School Choice for New Hampshire, and Cornerstone Action have active leaders and were not contacted nor invited to help organize this event.

These organizations have worked with national organizations in the past in order to bring New Hampshire voters information on issues in education. Their goal has been to make sure the discussion is focused on engaging parents who have been negatively impacted by the federal reforms in education.

Can you imagine if these candidates were to come and discuss the importance of supporting the 2nd amendment and ignore all of the New Hampshire pro-second amendment organizations? One would have to wonder, why the snub?

Could it be that the moderator of this event, Campbell Brown, is an avid supporter of Common Core?

Campbell Brown is featured in this article by one of the nationally known activists, Mercedes Schneider. Schneider explains how Brown wants to explain to all of us what Common Core is all about. As if those of us who’ve actually had to deal with it in our schools remain uninformed. But isn’t that how our own Commissioner of Education and Chairman of the Board of Education have treated parents in the past?

We don’t know how great Common Core really is even though we are the ones directly impacted by the confusing math, flawed testing and data collection.

Don’t you just love how the elites who want to tell us how great Common Core is while their precious angels never have to deal with it in their private elite schools? Schneider provides a long list of elitists who force Common Core on our schools but wouldn’t touch it for their own kids. Campbell Brown is included in that list along with President Obama.

It looks like the BIGGEST Common Core supporters running for president will be at this summit, Governors Jeb Bush and John Kasich. Governors Bobby Jindal, Chris Christie and Scott Walker have Common Core baggage that cause many of us to question their capacity to make good decisions in education if they were to become president. Carly Fiorina would be wise to skip this summit,contact local grassroots organizations and start talking to the parents who want to be heard instead of TOLD that the garbage they are seeing is really good for their children.

Senator Rand Paul came to New Hampshire several months ago and met with the parents and teachers fighting Common Core in New Hampshire. Senator Rick Santorum has an education summit scheduled tomorrow in Manchester to do the same thing. Candidates like Senators Cruz and Rubio have said they’d be willing to work with New Hampshire activists and parents to engage in the same kind of discussion. In other words, they want to meet directly with the people who’ve been impacted by the federal reforms coming from D.C. into their child’s classroom.

Did the campaigns involved in this upcoming summit make a mistake by leaving out the grassroots organizations? We wondered about that, however it seems that if you want to control the message and make sure the tough questions are kept out of the discussion, what better way than to keep those closest to the problem away from the discussion.

New Hampshire parents, once again your rights are under attack by the Senate Education Committee.

The Senate Education Committee today voted 3 to 2 against parental rights (HB603) in New Hampshire. HB603 :
This bill declares that a student exempted from taking the statewide assessment by the student’s parent or legal guardian shall not be penalized. The bill also requires a school district to provide an appropriate alternative educational activity for the time period during which the assessment is administered..

HB603 would put into statute important legislation supportive of parental rights to opt out of the Smarter Balanced Assessment.

We know the numerous problems with the new Smarter Balanced Assessment (SBA):
1) School Board Member and State Representative David Murotake testified that Nashua teachers said this about the SBA
a) totally grade level inappropriate
b) Seems the test was designed more as a psychological or sociological experiment, not as
a measure of academic learning
c) It is nothing less than child abuse for my special ed students in my classroom
2) According to Rasmussen: The Smarter Balanced Common Core Mathematics Tests Are Fatally Flawed and Should Not Be Used An In-Depth Critique of the Smarter Balanced Tests for Mathematics
3) Dr. Gary Thompson, License Child Psychologist calls the Common Core assessments: Cognitive Child abuse
4) Teacher in NY reports that the Common Core testing is child abuse

There is enough evidence to show that the Smarter Balanced Assessment should be halted in the state of New Hampshire. However since our Governor and her Commissioner ignore these warnings, it is up to the parents to step in if the school administrators will not.

Parents have the fundamental right to guide their child’s education and that is consistently upheld by the U.S. Supreme Court. However in this rush to chase federal dollars, concern for children is no longer taken into account. Yes parents, your children are now subjected to child abuse per trained professionals and medically licensed physicians so we can get our money back from the federal government. TALK ABOUT GREED.

HB603 is a valiant effort to ensure parents will have that right to refuse this abusive testing scheme.

Today April 28th, the Senate Education Committee voted “Inexpedient to legislate” on HB603. That means the majority, three of the five members, voted to KILL HB603 and deny you your parental rights. (Senators Stiles, Watters and Kelly) Why? Well as you can see in this video, Senator Stiles spells it out for you. She’s concerned about losing federal dollars.

So is she right? Does New Hampshire run the risk of losing federal dollars? And how much do we get annually from the feds? We all know how high our property taxes are each year and that’s where the majority of your school’s budget comes from.

On average schools receive less than 10% of their budget from the Feds. In other words, you pay over 90% through state and property taxes to your schools but your voice doesn’t matter. The feds pay less than 10% and that’s what Sen. Stiles is concerned about.

Since HB603 would put into statute a parent’s right to opt out of these bad assessments, let’s look at how that has impacted other states. Did they lose federal funding?

According to fairtest.org there is nothing to fear as Sen. Stiles would have you believe.
States, districts and schools sometimes claim they will lose federal Title I funds if parents, students or teachers boycott standardized tests required under No Child Left Behind (NCLB). As far as we know, no school or district anywhere in the country has ever been penalized for failing to test enough (95%) of its students. Further, seven states (Utah, Wisconsin, Pennsylvania, Minnesota, Oregon, Washington and California) have laws allowing opt out, and none have been sanctioned. Parents, students and teachers generally should not fear harmful consequences to their schools due to federal law if parents boycott standardized tests.

We’ve heard these threats before but where’s the PROOF? Where’s the proof Sen. Stiles that New Hampshire would lose federal dollars (OUR money) if we were to put in statute the parental rights we already posses?

Why are our elected representatives more concerned about pleasing the federal U.S. Department of Education bureaucrats more than the parents and residents who elect them?

We urge everyone to contact New Hampshire Senators and vote AGAINST the Committee recommendation to KILL HB603 and to support parents in New Hampshire.
Senators@leg.state.nh.us 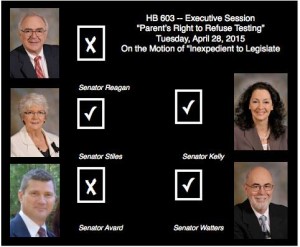 IF you think it’s bad now, LOOK OUT. We’ve received word that the NH Board of Ed (appointed Board of political cronies… NOT elected by the people) either adopted the Next Generation Science Standards (in secret) or are on their way to formalizing the national SCIENCE STANDARDS in New Hampshire.

If you think the Math and English Common Core standards were bad, the Science standards are WORSE.

IF you want a quality education for your children, you have GOT to speak up.

Here are some articles to read on The Next Generation Science Standards:

Write the New Hampshire Board of Education and tell them NO on Next Generation Standards!
We do NOT want another set of Common Core Science Standards.
WE expect New Hampshire to use the BEST academic standards.

Tell them they NEED to have PUBLIC HEARINGS and to STOP denying the public to weigh in on these standards.

We do NOT want POLITICALLY MOTIVATED SCIENCE STANDARDS in New Hampshire

NH Board of Education

And a copy to the House Education Committee:
HouseEducationCommittee@leg.state.nh.us

The Smarter Balanced Assessment that schools are poised to give this spring has no external validity or reliability.

“In laymen terms this means that the test developers have no corroborating outside confirmation to prove that their test questions measure what they claim to measure or can produce consistent results in repeated administrations. All they have is their own claim of validity and a plan to develop this external validity some time in the future. This means that no meaningful conclusions can be drawn from student scores on this exam.

“Despite the fact that SBAC piloted both the test items AND the delivery system simultaneously, making determination of why a student may have missed an answer extremely difficult to tease out, SBAC went ahead and set cut scores from data collected during the pilot tests given last spring. Further, by design, those cut scores have been set so that 62% of the children will score below proficient according to this EdWeek article.”