Is VanOstern trying to deceive parents on his support for Common Core? IF you look at his web site, he says,

In his debates with Chris Sununu, he dodges the question on Common Core. Chris Sununu has said he would remove Common Core from New Hampshire Schools. VanOstern diverts attention to his support for PACE. But most parents don’t know about PACE so is he trying to deceive them?

PACE is more Common Core testing in your schools. Like the other Common Core standardized tests, there’s no independent validity studies on PACE. This may be an experimental way to test your kids, but they will be testing them on Common Core.

Not only will they be tested on the dumbed down Common Core standards, but also the subjective “21st Century skills.” If your child doesn’t have the right dispositions or attitudes included in the competencies, they will not advance. That’s why parents often times complain about the subjectivity in the grading.

The Smarter Balanced Assessment is given 1x/year but PACE will incorporate multiple assessments. PACE was brought in to reduce testing but if you pay close attention, you’ll see testing increases with PACE.

VanOstern also mentions that PACE is based on “project based learning.” That in itself has become controversial. If this is how they test, that’s how they will teach. When did you ask the State of New Hampshire to mandate teaching methods? Shouldn’t that be left up to the local district?

If your child is tested on a project, how do you know they’ve mastered the content first? There is a lot of talk in the education community that facts and knowledge do not matter. Why not simply say literacy is no longer the goal in this education reform? They want to focus not on the “doing.” But public education is supposed to be about imparting knowledge so when students are ready, they can apply their knowledge. In other words, if you do not put in all of the ingredients, you cannot bake the cake properly.

How do you know all of the ingredients have been put in? That’s what a lot to people are asking now. How will parents know their children have mastered their math facts or know the natural origin of the material used to make common objects, in science?

Every few years education reformers come up with a new and innovative way to teach children but when you peel back the layers, you find the old failed fads that have been tried before. They dress them up with a new name (Competency Based Ed instead of Outcome Based Ed), sell it like it’s new and innovative, and then hope for the best.

All of this can be a bit confusing to parents which is exactly why we question the authenticity of Colin VanOStern. Why hasn’t he made a definitive statement on Common Core? Is it because Democrats were warned not to talk about the subject? One of the leaked emails from DNC deputy communications director Eric Walker described the Common Core as “a political third rail that we should not be touching at all.”

Is this why VanOstern wants to stay away this subject? Is this why he references the PACE testing scheme so parents will not recognize it as more testing on Common Core and competencies?

It sure looks to us like we are going to get the same failed standards, tests and curriculum in a VanOstern administration. He hasn’t offered parents any hope that things will get better and he dances around the subject and deceives parents in the process.

If you oppose Common Core and you want something better for your kids, VanOstern is NOT the person we want as Governor.

Check out where the candidates are on education here.
Vote on Tuesday, November 8th

Good news for public education, one candidate for governor is making it clear, he’s not satisfied with the dumbed down Common Core standards for our children.

Governor Hassan has disappointed too many NH parents. She’s ignored teachers and hasn’t sit down to listen to her constituents.

It’s important that you let Executive Councilor Chris Sununu know you are grateful that he’s hearing the parents and teachers in New Hampshire. 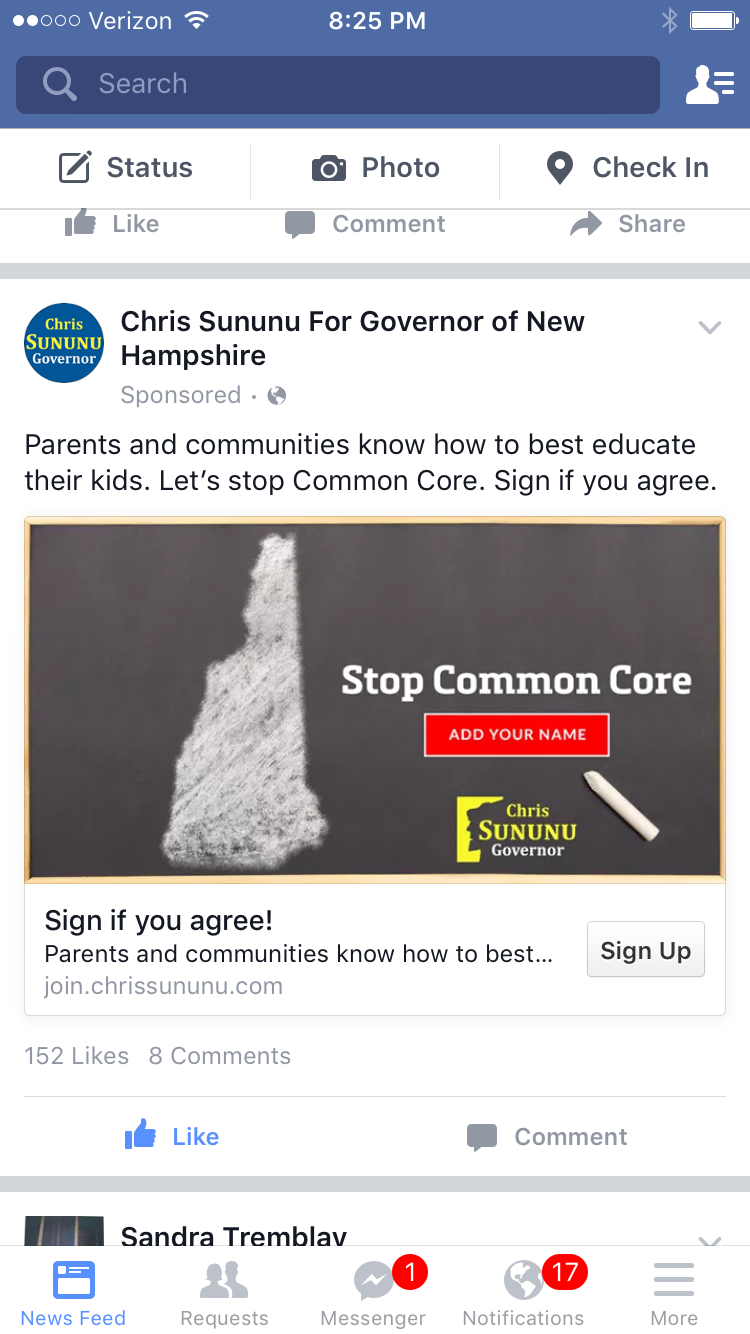 Similar to HB 1508, legislation to terminate Common Core in New Hampshire, parents came out in large numbers to oppose Duncan’s appointment to the Board of Ed.

Councilors Joe Kenney and Chris Sununu both commented on how they received an enormous amount of calls and e-mails on this ONE controversial nomination.  They listened and both voted against Governor Hassan’s nomination.

Councilors Pappas, Van Ostern and Pignatelli all supported the nomination.  The vote was 3 to 2 split down party lines.  Republicans OPPOSED and Democrats SUPPORTIVE.

Many parents across the state came out in opposition for various reasons.  Duncan opposes School Choice and is the leading plaintiff in the lawsuit against New Hampshires School Choice scholarship program.  He has also been opposed Charter Schools.

At stopcommoncorenh.org we try to focus on Common Core related issues and also felt this appointment was wrong for New Hampshire because of Duncan’s activism in support of Common Core.

There has been testimony from professionals on the developmentally inappropriateness of the Common Core Standards.  This has been confirmed by Licensed Child Psychologists, teachers and Math and English content experts.

However we think it’s important to hear directly from a teacher who sums up what this really means: CHILD ABUSE.

While that is a strong term, if a teacher reports child abuse, it must be acted upon.  So if what we are doing to children in the classroom raises to the level of child abuse as this teacher claims, and the Common Core Standards are developmentally INAPPROPRIATE, what are these people doing to our children in New Hampshire?

Governor Hassan chose the most radical and extreme political activist in New Hampshire to serve on the New Hampshire Board of Education.  Has she given any consideration to the charges that are being leveled in this national debate?  Has she made any kind of statement that things are different in the New Hampshire public schools?  How can they be when almost all of them are using the Common Core Standards and will be subjected to the test that Nashua teachers said were inappropriate for children?

After you watch the video below ask yourself, are these the kind of people we want making decision for our children in our schools?  Or should we elect legislators who are willing to listen to parents and do the right thing? Common Core’s Child Abuse

Share this page with every parent and voter in New Hampshire.  Here are your Executive Councilors