Competency Based Ed (CBE) in NH is based on the old and failed Outcome Based Ed (OBE) fad. This rehashed failed fad has offered no independent measurable academic achievement in our schools.

Parents assume being competent means their children will know that 2 + 2 = 4. The history is very different from what parents have been led to believe.

OBE is a failed fad in terms of failing to improve academic achievement. This is why parents should be asking their Superintendent, bureaucrats from the NH Dept. of Ed and members of the NH Board of Education for proof. After several years of CBE in NH, where is the INDEPENDENT PROOF CBE has improved academic achievement?

OBE has been criticized in the past for attempting to change the values, attitudes and beliefs in students. The focus is not on literacy or academic excellence, it’s on workforce skills and changing a student’s beliefs and values.

Competency Based Education is part of the Obama agenda to redesign public education from a liberal arts model to a dumbed down workforce training model.

Marc Tucker, key architect of this redesigned model, attempted to transform education during the Clinton years. The full implementation was derailed however we saw key elements begin years ago. Now the entire agenda has been kicked into high gear from the Obama administration and facilitated through Hassan’s Dept. of Education.

So what does CBE look like in New Hampshire? We’ll provide a few examples of how CBE has been used, not to improve academic excellence in our schools but to indoctrinate students in a belief system that many parents object to.

In Bedford several years ago, a controversial book was assigned to students in their Personal Finance Class. This is a class where parents assume their children would learn about calculating simple interest or learn to balance a check book. However many were surprised to find out that their children were subjected to a political operative’s extreme views on minimum wage.

The book, Nickel and Dimed On (NOT) Getting By In America, met a “competency” and yet only provided students with a politically biased view on minimum wage. This wasn’t a lesson in personal finance, it was political indoctrination through Competency Based Education.

From The Blaze
Excerpt:
“We found the book provided valuable insight into the circumstances of the working poor and an opportunity for students to demonstrate mastery of the ‘Financial Impact’ competency,” the committee reported.

In Rochester one parent expressed anger on social media when her child came home with a “competency” based assessment that was nothing but a soft propaganda piece on video games. Since Bill Gates and the TECH Industry profit the most off of this education reform, is anyone surprised that they want their product message embedded in your child’s curriculum? 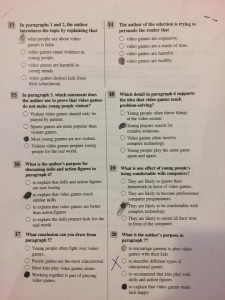 This Obama redesign facilitated by Governor Hassan’s Dept. of Education is not about elevating the academic content in our schools. This is another attempt at “social justice” education brought to us by the same people who’ve tried these failed fads over the last two to three decades.

It was through a grant from the Nellie Mae Foundation (funded by Gates and the U.S. Dept. of Ed) that facilitated CBE in New Hampshire.

The biggest loser in this reform is the children. Your child is now being denied quality academic content in favor of content that seeks to change your child’s attitudes.

Whether it be political or consumer attitudes, one thing is for sure, your children are being used as pawns instead of educated.

This is the legacy of Governor Hasan, the New Hampshire Board of Education and legislators who continue to support reforms that turn our schools away from a focus on literacy.

Even in the extremely liberal state of Massachusetts, parents are lining up to demand “written consent” on surveys given to their children in school.

Whether it be on gun ownership, sexuality, drugs or alcohol, parents are fed up with schools gathering information on their children.

Fox News in Boston recently covered a hearing where Mass. parents demanded written consent from parents when their children are given surveys and questionnaires. One parent said of the students subjected to the Youth Risk Behavior Survey, “they need counseling after being subjected by this questionnaire.”

Another parent said this during her testimony, “I was sick to my stomach. I couldn’t believe it. I was shocked.”

So why is it so hard to get similar legislation passed in New Hampshire?
Representative Terry Wolf (R) of Bedford testified in opposition of HB206 and then added an amendment that removed written consent when schools administer surveys or questionnaires.

A representative from a survey company also testified against HB206 claiming that they’d get less participation in the surveys if parents actually saw the questions that were being asked.

A LARGE number of parents came out to testify in support of HB206 but again, we see legislators more concerned about pleasing a few people than parents in New Hampshire.

One parent in NH testified that a teacher required students stand up to move forwards or backwards when answering embarrassing questions. This gave all of the people in the room a clear picture on how the student answered the question.

Rep. Wolf testified that this is a local control issue and the State shouldn’t pass HB206. What is MORE local than the parents? As Chair of the Bedford School Board she also worked to deny parents “written consent” in Bedford. Now Rep. Wolf wants to make sure that all parents in New Hampshire do not have that opportunity in the name of “local control.” Does that even make sense?

HB206 has been watered down thanks to the efforts of a few people. The Senate votes on HB206 next week and will most likely follow the House version that was amended by Rep. Wolf and removes written consent from parents.

At the hearing in Massachusetts, newly elected State Rep. Rady Mom (D-Lowell), an immigrant from Cambodia who had been sent to a Khmer Rouge camp with his family as a young boy, was particularly shocked at the testimony, and said to one of the mothers after she spoke:

I’m just thinking of the questions being asked and I’m saying to myself, wow, this is what they did at a communist country where I just came from. This is amazing. This is what they’re trying to accomplish at our schools? I will look into it more. Thanks for coming.

Parents your voices were silenced in the Senate Education Committee yesterday but you have one more opportunity to change that.

HB206 required school districts to adopt a policy regarding student participation in non-academic surveys or questionnaires. The original Bill required districts to obtain written consent from parents before they could survey your children on personal information including sexuality, drugs, alcohol, etc.

Parents from across the state wrote the committees and testified in support of this important legislation. Rep. Terry Wolf-R from Bedford watered down the language by removing written parental consent through an amendment in the House.

The watered down version passed the House and moved to the Senate Education Committee where more parents came out to support HB206 but demanded that written consent be added back.

We are sorry to report that in the Senate Education Committee, the entire Bill has been amended to a “study committee.” A study committee is where legislation goes to die.

We encourage you to scroll through one of the invasive surveys that was recently given to students in Bedford. http://www.girardatlarge.com/wp-content/uploads/2014/04/Attitudes-Behaviors-Survey-1.pdf

There is still an opportunity to overturn this decision. Write your Senator and then send a copy to all of the senators (Senators@leg.state.nh.us) asking them to vote NO on the Study Committee Amendment and support an amendment that restores written consent to the original Bill.

Tell them it is their duty to uphold parental rights in New Hampshire.

Parents, Teachers, Students, and all other Community Members,
I am writing to ask you to fill in a short feedback form on my work as the superintendent of the Bedford School District. In the survey, I have listed seven “competencies” that an effective superintendent should master. While there are many other competencies, these seven relate particularly to my interactions with parents, teachers, students, and community members. I would appreciate your feedback so I can continue to improve. I will keep the survey open until Friday, April 10.

The mission of the Bedford School District is to develop a community of learners who are intellectually curious, resourceful, and respectful of self and others. Academic achievement, through constantly improving standards, is the district’s highest priority.