Teachers around the country have been subjected to failed education reforms for decades.  Unelected bureaucrats at the U.S. Department of Education are now pushing another reform: Common Core.

Common Core has been described as “an attack on teachers”.   Why?  Because the U.S. Dept. of Ed is pushing test scores be tied to a teacher’s evaluation.

We’ve seen this in NH with Governor Hassan’s Commissioner of Education, Virginia Barry walking lockstep and pushing this through the Model Teacher Evaluations.

This kind of approach pushes the “teach to the test” mentality in the classroom and now we have NH teachers speaking out and describing this harmful effect on students and public education.

If you recall, Rep. Annie Kuster is running an ad criticizing her opponent, Marilinda Garcia for wanting to abolish the U.S. Dept. of Education.  An agency that has a budget of $69 BILLION dollars.  Money that COULD be used in local schools instead of on a Secretary who acts like a tyrant.

Teachers across the country are beginning to realize the real damage that comes from having a Federal Department of Education and are joining others in calling for eliminating it.

Clueless Kuster is so far removed from the reality that OUR teachers face in the classroom everyday, that she doesn’t realize the damage that is being done to OUR children and OUR teachers.

If you don’t believe me, look at a recent TWEET by @badassteachersA (Bad Ass Teachers Assoc.)  With over 13,000 followers across the country, teachers know the damage they see coming from the U.S. Dept of Ed.  Clueless Kuster still remains…CLUELESS. 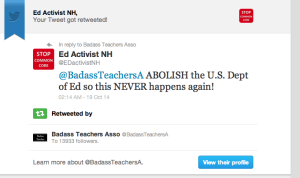