States have been ditching the Smarter Balanced Assessment (SBA) for a few years now. Public backlash has caused some governors to reassess whether they should be using the highly controversial assessments in their public schools.

In NH, Governor Hassan and the bureaucrats at the DoE still can’t admit the SBA was a huge mistake on their part but since parents are refusing to let their kids take it, they are finding other ways to force compliance. The latest assessment scheme they came up with is the PACE assessments.

PACE assessments are in a few pilot schools throughout New Hampshire. Parents are starting to realize that even though they were told there’d be less testing with PACE, that simply isn’t true.

A recent post from a parent in a PACE district who refuses to let her kids take the standardized assessments confirmed this on Facebook: 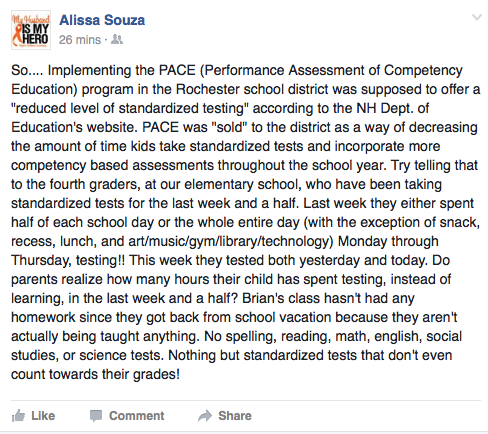