The conference teaches that ‘all white people are racist and all students of color live in a white supremacist culture.’ 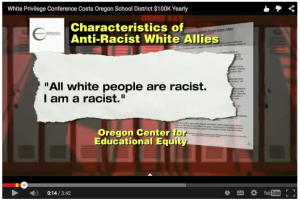 This is going on in every school district in America. 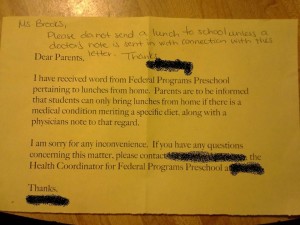 “Why should the parents be required to bear the expense of a doctor’s visit to get the required note to be allowed to send healthful, homemade lunches for their children?”

The answer is, the government has NO RIGHT to keep children from eating lunches brought from home.

Don’t think this is not going on at your child’s school in NH. Because it is.

Parents of Fulton Middle School students are outraged over a series of questions put to them by two physical education teachers, and the school superintendent is apologizing to them and vowing that such incidents will not happen again.

The children who answered yes were reportedly asked to step forward.

Income taxes and Common Core… Girard at Large has the audio…

Parents in Gilford attended a school board meeting and said they are trying to understand why Gilford High School is requiring some students to read a book that includes a graphic sexual encounter.

“I am utterly appalled that this was an oversight, that my son had this book in his hand for a week. (It’s) unacceptable,” said Sarah Carrigan, a parent.

But Gilford is claiming that students were assigned Picoult’s book because of an ‘important theme’ that it contained.

The theme is only important if you are pushing GUN CONTROL. The sex is just in there to get the kids to read it, but the message is political. All lessons are embedded with this kind of far left propaganda which is demonstrative of the fact that they are using our kids for political mules.

Girard at Large weighs in…

Manchester’s Livingston claims school board did not have jurisdiction over the class de-leveling decision.

Girard at Large has the story.

The National Governors Association is a NON governmental body that had a lot to do with crafting and promoting Common Core. This should have been illegal.

American Principles Project, Eagle Forum, Concerned Women for America, Home School Legal Defense Association and several other grassroots conservative groups launched a campaign urging the Chair of the National Governors Association, Governor Mary Fallin (R-OK), to end the Common Core State Standards Initiative. The NGA, along with the Council of Chief State School Officers, are co-owners of the copyright to the Common Core.

Governor Hassan has recommended extremist Bill Duncan for the NH Board of Ed.

PLEASE take your time to write to YOUR Executive Counselor and tell him to vote NO on this nomination.

Mr. Duncan has been leading the charge FOR COMMON CORE in NH as a political activist. He also filed a lawsuit against the State of NH to stop the School Choice program that gives low income families scholarships in order to help them find a school (public or private) that is best for their children.

Mr. Duncan is a self described “political activist”, with a history of alarming rhetoric regarding public charter schools and the education tax credit scholarships.

Even if you are opposed to the tax credit law, you do NOT want Duncan’s uninformed and extremist views to poison this board.

Mr. Duncan’s confirmation could come as early as this Thursday making it imperative that we act quickly and alert the public and contact our Executive Counselors.

Samples of his rhetoric:

“Charter schools are a political statement not an educational improvement”.
Source: http://anhpe.org/2013/07/05/charter-schools-are-a-political-statement-not-and-educational-improvement/

“I always consider policy discussions about privatization – proposals to dismantle public education and replace it with charters, vouchers and home schools – a distraction…”
Source: http://nhlabornews.com/tag/bill-duncan/

“The education tax credit is an embarrassment to the state, and the Senate should vote repeal the program before it begins to do real damage.” Source: http://anhpe.org/2013/03/28/education-tax-credit-is-an-embarrassment-for-state-bill-duncan-letter-to-the-portsmouth-herald/

Bad Choice for Board of Education

Governor Hassan has chosen the most extreme person she could to nominate for the NH Board of EDUCATION. Bill Duncan, a self-proclaimed expert whose only credentials in education are that he created a blog where he regularly misinforms his readers by providing heavily redacted snippets of sentences of his opponents and then comments on them. He is far from an expert on education or children. In point of fact he can be accurately labeled as the biggest current enemy to a particular class of NH children. That class of children are the most vulnerable ……the children who come from families whose income falls below 3 times the federal poverty line.

Bill Duncan is the plaintiff (meaning he personally engaged attorneys and filed suit against the state of NH) in an on-going lawsuit AGAINST these very children claiming that they should not be allowed to attend any other school but the one assigned to them by zip code. His attorneys have fought hard to stop these children from accepting donated money that would allow them to attend a school better suited to them (even if that school is a different public school believe it or not).

THIS is the kind of man Maggie Hassan says NH children need as their advocate on the Board of Education? Are you kidding me? Governor Hassan couldn’t possibly have made a worse choice than nominating a man currently suing the State of NH to prevent parents of modest means from helping their children escape a school setting that is not meeting their needs. An awful choice, Ms. Hassan. Just awful. Let your executive councilor know. Stop this nomination.