Let’s take a look at Governor Kasich’s unwavering support for Common Core and cut through his “spin.” We’re going to give you facts he leaves out of his campaign speeches that actually makes Governor Hassan look better when it comes to education policy.

Since 2012 New Hampshire has been facilitating the federal take over in education with the dedicated help from Governor Hassan. We’ve shown New Hampshire residents how those policies are hurting our schools, teachers and most importantly our children.

When you look at what Governor Kasich has done in Ohio, you realize, he’s doing the same things. Not only is Kasich facilitating the federal agenda but he is then spinning it as if he supports local control in education.

We are going to start with the recent report card that was put out by, American Principles in Action, The Pulse 2016, and Cornerstone Policy Research Action.
In this report card it’s important to note that Governor Kasich (along with Gov. Bush) received an “F”. You can read the full report here. Governor Kasich earned an “F” grade for various reasons and has done more to violate the privacy of students than protect it.

The 350 Ohio school districts currently participating in the program are required to share extensive amounts of personally identifiable data on the students and their parents without parental knowledge or consent. The data shared with authorized third parties are not anonymous or disaggregated in any way according to the data sharing agreement. Researchers have access to students’ social security number, biometric identifier, or student number.

According to this scathing report, “on the issue of student data privacy, Kasich has exploited, not protected, the students and families in Ohio.” http://ohioansagainstcommoncore.com/data-sharing-agreement-must-read/

Privacy is so important to New Hampshire voters, it has caused legislators like Rep. Cordelli to draft legislation to protect privacy on students. Kasich is doing the opposite of what our elected representatives are doing on behalf of New Hampshire voters.

Ohioans against Common Core has a detailed page exposing the data sharing agreement in Ohio. They warn parents about the crony deal that it was set up, “to capitalize on your child’s personal and education data for the benefit of the education establishment and their cohorts. It is essentially a Common Core slush fund…..”

Remember we’ve been warning parents that when the bureaucrats at the NH Dept. of Ed say you have nothing to worry about when it comes to sharing student data, that is NOT true. Once an organization is “identified” as “research based,” all information can freely flow to that organization without parental knowledge or consent. It’s just a matter of making sure the organization is labeled correctly.

The new “spin job” from Kasich appears to be, facilitate the federal agenda but call it “local control.” Those of us who’ve been fighting Common Core realize this is one of the biggest lies perpetrated by Common Core proponents. They say schools can use any standards they want, but then force Common Core assessments on those schools. If a school is forced to use a Common Core assessment, the curriculum will be aligned.

That’s why a fellow Republican in Ohio took Governor Kasich to task and explained how this reform was not a local initiative. In the letter printed in the Washington Post, Ben Gibson, a Republican and vice president of Firelands Local Schools in Ohio, was angered by comments that Kasich made during a Fox News interview. If the Governor doesn’t know how Common Core was developed, is he really equipped to govern at the national level?

In Ohio under Kasich, an agreement was made to use the Common Core “PARCC” assessment. It’s the equivalent to the Smarter Balanced Assessment being used in New Hampshire.

After public scrutiny and outrage over PARCC, Ohio decided to withdraw from the PARCC consortium. However like many proponents of Common Core, they replaced it with another lousy Common Core assessment. It appears that when there is public outrage, the solution is to go from bad to worse. By withdrawing from PARCC and using another assessment from AIR, the parental victory was no victory at all. It was a calculated move to manipulate the critics.

Ohio went from one bad Common Core assessment under the Kasish to another one. That’s not leadership, that’s incompetence.

Ohio’s Charter schools have faced criticism over attendance rates and accountability. However the biggest scandal occurred recently when the Director of School Choice in Ohio was found rigging the data on Charter schools.

In this article by Brietbart, David Hansen who was the Director of School Choice and also the husband of Kasich’s chief of staff, turned into one of the biggest scandals to date. Brietbart reported that Hansen, “resigned after admitting he manipulated evaluations of some charter sponsors….. The data rigging allowed the sponsors of poor-performing online schools to appear to be engaged in adequate supervision of those schools.”

What is even more shocking is that Hansen had a history of corruption.
“And Hansen himself is not new to data rigging.
As Ohio Political blog Plunderbund reports, in 2009, while Hansen was president of the Buckeye Institute, he was also caught manipulating data about Ohio’s charter schools, yet was still chosen to be school choice director in 2013. Many of the schools involved were owned and operated by for-profit company White Hat Management, which itself is owned by David Brennan, a big donor – through his family’s foundation – to the Institute, to the Republican Party, and to Kasich’s campaign in Ohio.”

Governor Kasich created a state level position for his Chief of Staff’s husband who has a history of unethical behavior. That’s not leadership, that’s incompetence.

Finally, we can see an attempt by the Kasich administration to eliminate local control of schools in the state of Ohio. This should be the final nail in the coffin by New Hampshire voters since we pride ourselves on local control in education.

HB70, which was recently signed into law by Governor John Kasich, not only erodes local control, it is the prescription to eliminate local control as dictated by the Chief architect of Common Core, Marc Tucker.

The goal of the Common Core agenda is to remove local control of public schools and shift power to the state level. However if you look at who is controlling the “state” you see it is actually the Feds. Marc Tucker knew that if it appeared the Feds were ceasing control, “the people” would balk. If they made it look like the “state” is controlling education, there’d be less resistance. It was just another way to manipulate the public.

State level control of education in New Hampshire equals federal control. Governor Hassan has been facilitating the federal reform under the guise of state and local control during her tenure.

Governor Kasich is not only doing the same, but he’s gone even further by signing HB70.

In this article titled “A quick look at the new state takeover plan for failing school districts,” HB70 is the tool to remove local control from schools.

It’s also important to remember that part of the process of determining whether a school is failing involves using standardized test scores. That means using the Common Core assessments proficiency rates to determine not only if a teacher is “effective” but whether the school is failing too.

The Common Core assessments are NOT achievement tests, they are psychometric assessments on your child’s attitude, behavior and values. They are USED to collect personal data on your child so the central planners can then determine where your child will go in life. College or career? Your child is “human capital” for the state.

Under the Kasich regime he’s using data from standardized assessments that do not even tell parents whether their children are actually proficient in the core academic subjects.

Under HB70 Ohio sets up a new Commission that strips control away from parents and local residents and shifts that power to unelected bureaucrats. This is done to school districts that receive an “F” rating or the equivalent but isn’t it ironic that Kasich himself received an “F” rating on the issue of Common Core? Who gets to step in and remove his power?

Here is a list of duties that are removed from local elected boards and placed into the hands of unelected and unaccountable bureaucrats in Ohio:

(10) Creating a budget for the district;

(11) Contracting for services for the district;

(12) Modifying policies and procedures established by the district board;

This is the Progressive Marc Tucker’s DREAM. Stripping away power from elected local board members and shifting it to the state level which is the equivalent to the Feds running your local schools. To make matters worse, Kasich claims this is local control.

This isn’t leadership, this is a systematic federal take over in public education and it’s being facilitated by Governor Kasich.

Voters are not be getting the truth from Governor Kasich as he campaigns in New Hampshire, but we are smarter than he thinks. We take our duty to vet candidates seriously. We listen to their speeches but then we do our homework.

Well we’ve done our homework and we see that a Kasich presidency would look frightfully similar to an Obama presidency when it comes to education policy. We expect our leaders to lead and not follow some prescription for a centralized education plan that strips away the democratic process.

New Hampshire needs to give Governor Kasich the message that we do not want him as president and we expect him to go back to Ohio and clean up the mess he created there.

We deserve better from our elected representatives. 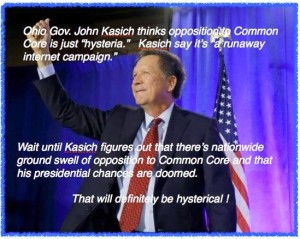