That’s not the only thing Barron’s got wrong.

According to the Daily Caller, “The latest version of a top-selling study guide for the Advanced Placement European History exam explains the French Revolution with a chart which identifies Supreme Court Justice Clarence Thomas as a fascist and pairs him with the Ku Klux Klan.”

The irony? The KKK as most white supremacist groups, are socialists. 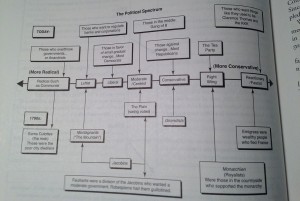 Upon examination, we see other biased and inaccurate statements such as most Republicans, along with conservatives, are people who are among “those against change”.

In another very laughable comparison, we see they have equated the ‘tea party’ with the ‘right wing’ and who support the ‘monarchy’. The reason this is laughable is that colonial tea party, as well as the modern day tea party were and are adamantly opposed to the monarchy, both in England then and now, especially the global elites that are said to run our countries.

Barron’s has listed ‘those who want to regulate banks and corporations’ as ‘leftists’, when the tea party, famous for bringing the ‘end the fed’ movement to the fore, certainly does not like the offshore global central bankers in control of the money in the USA.

It is also fair to say that when the government becomes corrupted, it is not just communists or anarchists, but also constitutionalists who would like to ‘overthrow the government’, or at least overthrow the people who run it poorly.

Parents who thought AP was the sensible alternative to programs like Common Core and IB, should review these materials. They might be shocked at what they find.